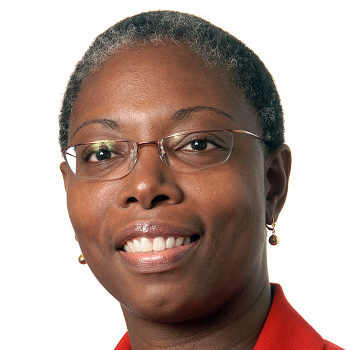 Dr. Jacqueline Hughes-Oliver is a Professor of Statistics at North Carolina State University.

She has made fundamental contributions in a number of areas including methodological research on prediction and classification, variable and model selection with dimension reduction, design of experiments, and spatial modeling. Application areas include drug discovery and cheminformatics, environmental modeling, transportation modeling, engineering manufacturing, genomics, and metabolomics. She is a Fellow of the American Statistical Association, and was awarded the 2014 Blackwell-Tapia Prize for research excellence in the mathematical and statistical sciences.

Dr. Hughes-Oliver has had extensive collaborations with scientists at GlaxoSmithKline and engineers at the North Carolina Department of Transportation. She was elected to the North Carolina State University Academy of Outstanding Teachers in 1996, named Alumni Distinguished Undergraduate Professor in 2001, and was the College of Physical and Mathematical Sciences Board of Governors’ Awardee (for pedagogical impact) in 2004. She also has experience teaching in summer programs as one of the instructors in the popular Summer Institute in Statistical Genetics, as well as the Summer Institute for Training in Biostatistics (SIBS). Dr. Hughes-Oliver served as Director of the Exploratory Center for Cheminformatics Research (2005-2009), and as one of the Directors of Graduate Programs for the Department of Statistics at North Carolina State University (2007-2010).